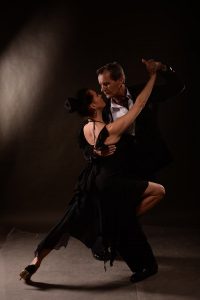 Very few dances are as seductively beautiful as the Rumba. With its swaying hip movements and close partner connections, it is a sensual and smooth dance. And, it isn’t a difficult dance to learn! So it’s easy to see why the Rumba is such a popular dance in the social ballroom dance genre.

Traditionally, the Rumba has been danced to slow Latin music. But, with popularity, it has become a common dance to current, popular songs. Everything about the Rumba makes it popular–the body movements, the rhythm, and the inspiring music. At Fred Astaire Dance Studio in Raleigh, our talented instructors love to teach the Rumba because of the joy it brings both to the dancers and the spectators. Read further to learn more about this stunning dance.

History of the Rumba

Rumba has a long history and encompasses a variety of styles of dance. One style comes from the rumba genre of Afro-Cuban music. This music and dance come from island dances like Son, Danzon, and Yambu. But, the style that is most well known in the U.S. is the ballroom dance we see in social dance and international dance competitions. This style of rumba comes from a Cuban rhythm dance called the “bolero-son.”

Rumba is an old dance that actually originated in the 16th century among the African slaves in Cuba. This original form was a fast and sensual dance with exaggerated hip movements and was danced to music with a staccato beat. Lew Quinn and Joan Sawyer, nightclub dancers in the early 1900s, introduced the rumba in 1913 to the U.S., but it didn’t really catch on until the early 1920s. This version of the rumba was slower and more refined. The popularity of the dance continued to grow in the U.S. through the 20th century worldwide.

Today the ballroom style of the rumba is highly popular. It is largely a dance showcased in competitive ballroom dancing. It is one of the slowest of the five Dancesport Latin dances. There are two different styles in competitive rumba dancing, International and American. The dances are performed differently in their emphasis and their basic steps are performed on different counts. The American style uses counts 1, 3, and 4 while the International style uses counts 2, 3, and 4. Additionally, in the American style, the dancer steps onto a bent leg; in the International style, the dancer steps onto a straight leg.

But, not only is the rumba danced competitively, it is very popular as a social dance, most commonly within ballroom dance studios. Because of its slower pace, it is more forgiving, and is a great starting point for foundational moves within other social Latin dances. This also makes it a popular style for a wedding couple’s first dance!

There are four beats in each measure of rumba music. This is also known as 4/4 time. The basic rumba step is a very simple box step: a slow forward or backward step and two quick side steps. The count of the rumba dance is “Slow, Quick, Quick”. The slow step is danced over 2 beats of music, while the quick is danced only over 1 beat. So each measure has one slow step and two quick steps. An alternative way to count the beat is: 1,2 (slow), 3 (quick), 4 (quick).

Rumba is a compact dance that is danced in place. The swaying motion of the hips doesn’t actually originate from the hips. Instead, it is produced by the movement of the legs. As you bend and straighten your legs (called the “Cuban Motion”), which is a Latin technique, you are changing weight. This creates a natural hip action and a swaying movement of the hips.

You won’t be able to run out of music for rumba! Traditional rumba music incorporates a variety of Cuban instruments, including claves (two hard wooden sticks struck against each other), conga drums, and maracas. But, you don’t have to dance to traditional music. The rumba is a great dance with any music between 120-144 beats per minute. Here are some modern songs that are great for rumba dancing:

Take a look at some Fred Astaire students Rumba dancing:

Spice up Your Life with Rumba Lessons!

Are you ready to learn the Rumba? Give us a call at (919) 872-0111 or fill out the contact form below to schedule your first lesson! (New to Fred Astaire Dance Studio in Raleigh? Take advantage of our new student special!)