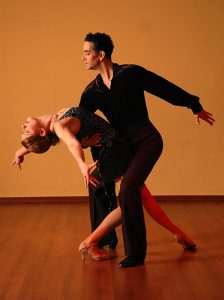 The origins of the Paso Doble (translated to “double step”) are disputed but every origin story has roots in Spanish bullfighting.  Since the 1930s, the dance has portrayed the gentleman as the bullfighter and the lady as his cape. During the performance, the actions of the bull are suggested along with some aggressive action in certain movements.

The main characteristics of Paso Doble dance are sharp movements and quick moves around the floor. To acquire the proper feeling, it’s helpful to visualize the pageantry of the matadors, as they make their grand entry into the bull ring and feel the attitude that they portray during the fight.

True to its name, Paso Doble moves quickly and you’ll take about 120 steps per minute when doing it!

Both the leaders and followers keep their hips forward in this dance. Some people even tilt their upper body back to balance out the forward position of the hips. The spine is straight and stretched up at all times to create a very dramatic look.

The leader, typically the man, will do a lot of posturing and high gestures, while the follower, usually the woman, performs circular steps around him. While most of the steps are led with the heel, there is a lot of moving on the balls of the feet to keep the high postures. The dancers keep a rigid and close hold on each other throughout the dance.

The most basic Paso Doble step involves standing on one foot (right if you are the leader, left if you are the follower). From there, each person takes tiny steps in place on the ball of the foot, counting 1-2-1-2.

Despite being a Spanish dance, Paso Doble step names are actually French. The chasse cape is one of the most popular steps and involves the man turning the woman in a way that mimics the matador’s cape. Other common steps include the basic movement forward (small steps forward) and basic movement back (small steps back).

Paso Doble music is generally danced in 2/4 time to music that is between 116 and 124 BPM (beats per minute). Here are some popular songs that are perfect for Paso Doble: