What is The Difference? 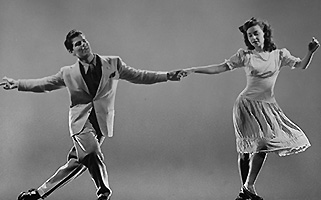 East and West Coast Swing dancing are both distinct forms of swing dance. Before you understand their differences, you should know their symbiotic history together.

Swing Dancing originated from the early 1920s and 1930s. Swing dancing has a long tradition of being a social and competitive form of dancing.

Four of the original swing dances that helped mold East and West Coast Swing and other dances are:

-Getting its start in the early 1930s, the Lindy Hop is notable for its degree of high physical activity. The Lindy Hop has an 8-count circular basic or “swing out. It has the ability to adapt and include other steps.

-The Balboa dance is not mimicking the fictional boxing star, Rocky Balboa. In regards to swing dancing, Balboa or Bal, as it also called, is an eight count dance performed in a closed position. This style came about at a time there were strict codes of conduct and limited space available. There are no turns or spins and the dancers are in contact with their upper chest at all times.

Originated in the Carolinas in the 1920s, it quickly spread throughout the nation during the 30s. It is danced to an uptempo beat and with jazz.

-Lindy Charleston is quite similar to the 1920’s Charleston. This form of Charleston includes a number of positions such as jockey, side by side, hand to hand, and tandem.

The East Coast Swing Dance is also knowns as triple step swing. The most common East Coast Swing move is the Jitterbug. With a basic count of 1&2, 3&4, 5,6 it goes along well with a music speed of 140-175 beats per minute or BPM. It’s dance pattern is usually performed in a circular motion. Of the two styles, East Coast is often referred to as the easiest to learn due to the simplistic 6 count basic. It can be danced to the beats of big band music, blues, rockabilly, and soul.

The West Coast Swing Dance style is a popular yet more complex form of swing dancing. It is adapted from other variants of swing such as the Lindy, Push, Shag, and Whip. The West Coast style gained more popularity into the 1950s. It is danced in a linear pattern often to slower music with a BPM of 110-130. It is considered to be more complex because of the numerous foot patterns which may contain 10 or more counts. With West Coast Swing, you would need a good sense of timing and connection. It can be danced to the beats of pop, rock, country, hip-hop and more. There is more freedom of expression with West Coast Swing.

East or West – Which Swing Style Do You Prefer?

Are You Ready to Check Out Swing Dancing in Raleigh?

Our Raleigh dance classes range from Ballroom to Latin to Swing, and everything in between! If you’re ready to Jive, Waltz, Hustle, and Mambo your way to great physical and mental health, call us at 919-872-0111 to schedule your first appointment or learn more about our group classes!

No partner required! We can’t wait to dance with you!